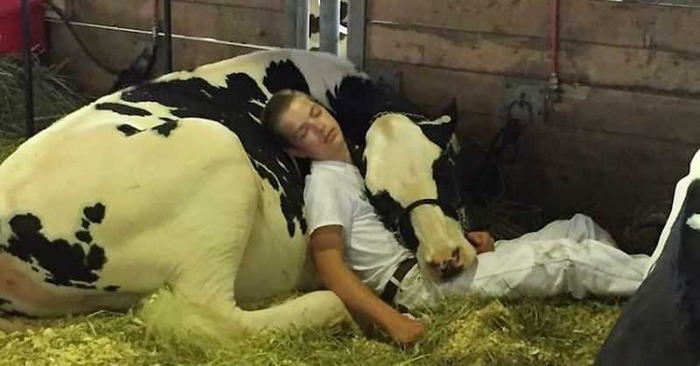 At the State Fair’s young dairy cattle exhibition, 15 year old Mitchell Miner and his faithful cow Audri were captured resting together. This is one of the examples of man-animal relationships, but this one is special, as it was about a child and cow friendship, that shows how powerful such relationships can be if we take the time to spend with our animals.

They didn’t won the blue ribbon, but were able to won millions of people’s hearts and became popular on the Internet. The photos showed the hard-working Midwesterners lives.

After many weeks of training Mitchell and Audry got up at 3 am on the competition day to get ready.

They decided to take a nap for some time after the event. And his father captured this amazing moment, which melts your heart no matter you were raised in the city or on the farm.

Mitchell was happy for all of the work they have done together, although Audri didn’t won the first place as the guy wanted.