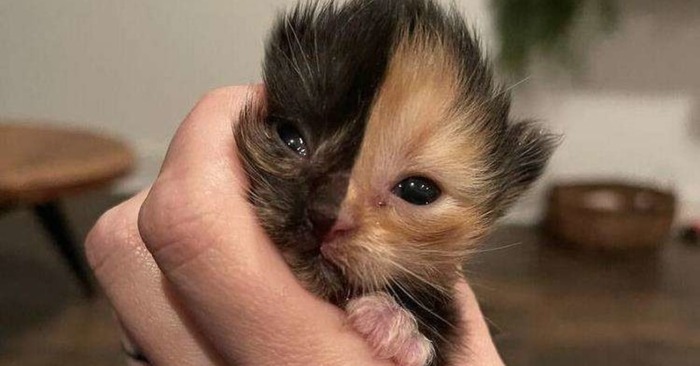 In the middle of March, a cat salvation center in Nashville, Tennessee got a regular shipment of rejected canines.

The married couple found the duo of newborn kids. The woman, in turn, discovered the cubs in the area of the recently purchased house, which was going to be reconstructed.

The kids were looked after by an employee of the orphan’s home named Kiki. It wasn’t the primal time she’d nursed the cubs, and she realized properly what to do. So, Kiki started searching for babysitters.

Luckily, two cats from the orphanage named Pickle and Olive recently had canines.

But even in this uncertainty, Kiki understood that her new charges were fully out of the ordinary. More precisely, one of them. A baby Apricot had the snout which was ideally separated into two halves by dyeing.

One side was dark and the other one foxy, that is the reason for the beautiful name.

This unusual state is known as chimerism. Scientists describe that this occurs when a canine arises from two joined eggs with various genes.

Nonetheless, the exclusive look does not intimidate other similar cats at all. He and his brother Krendelk, a fairly usual gray cub, were rapidly affiliated by two foster mothers.

And the biography of the canine, which was posted on Instagram by Nashville Cat Rescue, occupied the attention of hundreds of potential owners.